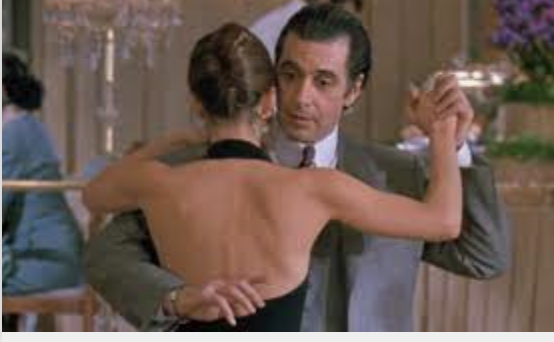 Scent of A Woman

It’s kind of funny now to think that I wouldn’t be dancing tango if it wasn’t for a Hollywood film.

Me, who is always complaining about how Hollywood, and the mainstream media, misrepresent and parody tango.

Scent of A Woman is a 1992 film with one short, sentimental tango scene.

I remember loving the film when it came out in the cinema. And I vividly remember the scene in which Al Pacino – a blind war veteran – dances tango with a beautiful stranger.

But in fact that wasn’t in that the actual moment that I decided to dance tango. I find it surprising that I didn’t but I put it down to the fact that I was very young and it simply didn’t occur to me. So I just carried on with my life as usual.

However, in another cinema, on another day that year, it did inspire someone to take tango lessons. My future brother-in-law. And it was through him I came to try my first tango class. (Thank you Daniel!)

Returning to the film over 20 years later, I prepared myself to be underwhelmed by the tango scene, which had indirectly changed my life forever.

And yes, it is true that the tango itself is only a sketchy representation of what the real dance should look like. My brother-in-law was determined to dance “like Al Pacino” but to my (now) more experienced eyes, it appears that Al Pacino took nothing more than a few basic tango classes before the film.

However, the sentiment of the scene is as beautiful to me now as it was back in the 1990’s. And if I look beyond the steps and style, what the scene says about tango still strikes a chord with me.

And these wonderful words from the film are still pearls of wisdom for any student of tango. And yes, I do occasionally quote them in my classes!

“No mistakes in the tango, darling, not like life. It’s simple. That’s what makes the tango so great. If you make a mistake, get all tangled up, just tango on.” – Al Pacino (as Lieutenant Colonel Frank Slade)

And the film has clearly made a long-lasting impact on popular culture. In our experience, “Por Una Cabeza” is by far the most popular song choice for the couples we coach for their wedding dance.

So yes, I am happy that it was this scene from Scent of A Woman that led me on the crazy course my life has taken. It is, in its own way, a beautiful representation of what tango is all about.

The dream of dancing tango with a stranger is not just a Hollywood fantasy. You can make it part of your life, like I did many years ago. Take a look at our class schedule and start your tango adventure today!