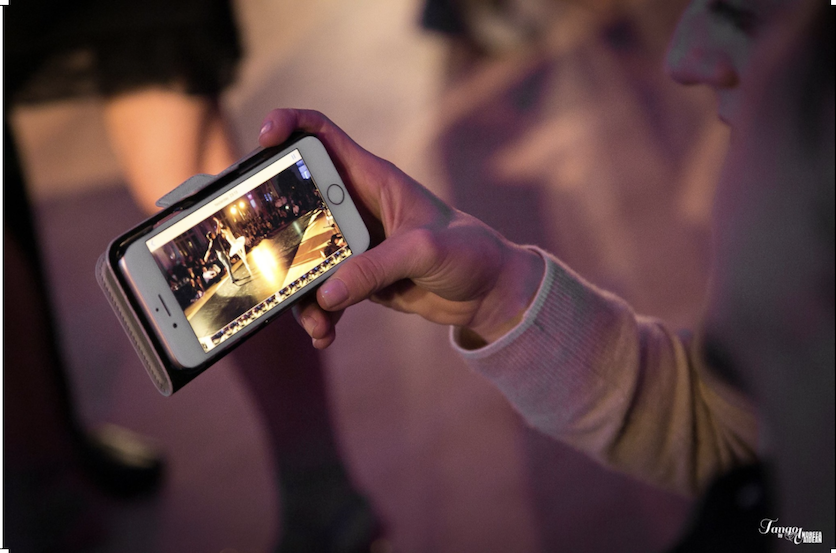 Here is a story that many of you will know only too well:

For several months, Student X has been pulling out all the stops to improve his tango.

He’s been dancing just about everywhere: classes, milongas, practicas, his kitchen… (not to mention the lift, the bus stop and the supermarket).

His non-dancing friends complain that they hardly see him anymore.

He’s invested time, money but most of all a great deal of emotional energy in getting better.

For a while, he felt like he was holding on to blind faith but suddenly he senses that something is working.

There has been a noticeable shift. He no longer feels like he is dancing through thick fog. His brain is sending messages to his body and his body is at last responding.

And what’s more, he’s starting to receive compliments. His teacher has praised him on his progress. His regular dance partners have noticed the difference. His hard work is actually paying off and you know how that feels? Amazing!

Then he watches the video.

The disappointment is overwhelming. A crisis of confidence ensues.

Of course, this is not how everyone reacts when they see themselves on video. Some people are actually pleasantly surprised and relieved to see how far they have come.

And in my experience this does not necessarily mean they have progressed further or dance better than Student X.

You can try telling this to those who have a negative reaction and it may make them feel a tiny bit better, but it’s very hard to alter what (they think) they’ve seen with their own eyes.

This was certainly my response. Knowing how upset a video could make me, the natural reaction was quite simply avoidance. Over the past 15 years, there are probably about 3 videos that haven’t made me want to hide under my duvet.

In some ways, simple avoidance is a reasonable strategy.

How you view yourself on video is not necessarily a fair representation of how you actually dance. I compare it with looking at yourself through a distorted fairground mirror. Some people are hyper-critical of themselves and you could take the view that if this is the case, it is not fair on yourself to go through the upset of watching a video. Dancing requires some confidence and self-belief and if you have just a little bit of that, it’s not a bad thing to try to preserve it.

But watching a video – especially one that you have an adverse reaction to – is also a golden opportunity.

Tongue in cheek, I call it the electric shock treatment!

Let’s got back to Student X’s story.

His teacher has been telling him for several weeks – no, let’s say months – to lower his shoulders. It’s not that he doesn’t care. That’s one thing we’ve learnt about Student X: he cares enormously! It’s just his body doesn’t seem to respond. In every class, he nods vigorously:

But the shoulders just don’t stay down.

Then Student X sees the video. Electric shock moment. It is a miracle cure!

Just the other night I complimented a student – a real student – on how much progress she made. Her response? Yes, you’ve guessed it!

“I saw a video of myself. It was awful. I realised how much I need to change!”

I told her it was a great thing that she didn’t watch the video and think “oh, how nice.” as it encouraged her to change.

And actually it was a sign of HOW WELL SHE DANCES, that she could identify those areas that needed improvement and act on them.

No one is born being able to dance – everyone has to start somewhere. And if you can yourself identify the areas for change through video footage then that will undoubtedly streamline your progress.

So the next time you view yourself in a video, remind yourself that it is a necessary part of the learning path to recognise your flaws and that the video is an excellent way to do so.

And before I sign off, one last tip for you:

In self-books, in order to silence our self-critical inner voice, they often advise us to imagine our best friend is talking to us and to replace that critical voice with a kinder one.

Next time you watch a video of yourself, imagine you were watching someone else. How would you feel about it then? You might find areas you want to correct but you’re sure to view it with a kinder and fairer eye.

Wishing you all a very happy viewing Tango Friends! Where’s the popcorn?